”If we don’t find that pod before it germinates, it’ll be the end of everything. Everything, do you understand? Even your pension!” The Seeds Of Doom (Doctor Who, BBC, 1976)

This may seem like an outlandish way to start a plant rant, but truth be known it isn’t far from reality.  Last month, the Tucson Botanical Gardens opened their newest exhibit called “Alien Invasion of the Plant Kind.”

According to TBG’s marketing manager Melissa D’Auria, the concept was inspired to “educate and inform the public about invasive plants and their impending environmental impact through the lens of colorful, vintage media” – specifically sci-fi horror films and their accompanying posters.

While the films are not rolling at the exhibit, they all allude to man-eating plants that take over the world – kill, murder, steal, and strangle anything in their path, not unlike that famous episode of Doctor Who.  It’s a metaphor that appropriately illustrates the impact alien plant species have on our ecosystem. And their potential effects were underscored recently when singer Katy Perry’s new album Prism – containing seed paper that can be planted – was labeled a biohazard by Australia’s Department of Agriculture.

Outside of Hollywood, these plants are called invasive species typically introduced to a new region where they take up residence, and then take over. 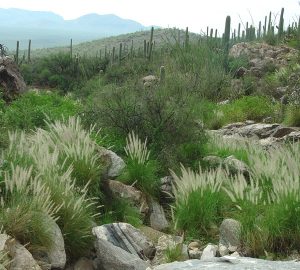 There are a handful of prolific plants of concern in the Sonoran Desert, some earning special project status due to their destructive tendencies, such as buffelgrass.  Others are basic pests, and others syphon water until there is nothing left to share with the natives.  We have highlighted four invasive desert plants most likely to be found in your back yard. So beware; you might be tending to them a bit too carefully. 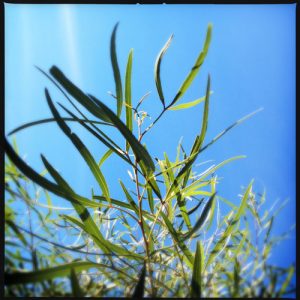 Have you heard the saying “Leaves of three, let it be”?  This is a good way to identify this weed that quickly grows into a dense shade tree and then via sucker or seed turns your yard, and your neighborhood into a water-slurping weed forest.  The leaves and bark can be an irritant and the pollen is highly allergenic.  It grows fast, and by the time it becomes a short shrub it is tough to remove.  If after reading this, you are inspired to chop yours down, whatever you do don’t burn the wood, because inhaling the smoke may irritate your lungs. 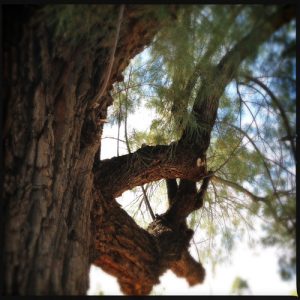 Saltcedar is a riparian species, meaning that it likes water.  This tree can be found along our desert waterways and in urban areas.  It tends to be more opportunistic when water is abundant, germinating quicker than our native willows, cottonwoods and mesquites.  They compete for water and win.  Additionally, they contain high levels of salt (hence their name). This increases the salinity of the topsoil, which is undesirable for our local friendly flora.

The other day I opened my kid’s lunch box and found the soft, sexy, furry burrs of fountaingrass.  Some remained attached to the inflorescence.  The remainder lined the interior of the lunch sack.  I was horrified.  Fountaingrass is sexy and seductive as it sways, backlit by the sun, but it reseeds and pushes out the natives.  Carefully get rid of it, and remember to regularly inspect the area for seedlings. There are lovely native grasses to replace fountain grass.  Deer Grass, Bull Grass and Little bluestem are three of my favorites. A recent move provided me with a lovely specimen of Ruby saltbush, straddling the property boundary from my neighbor’s yard into mine.  It drapes over an ocotillo fence, and it doesn’t look bad.  The birds love it.  The seeds are brilliantly colored– pink like that of prickly pear fruit.  But each seed that drops into my yard proves endless weeding opportunities.  It really doesn’t need water.  After visiting the Tucson Botanical Gardens exhibit, I learned Ruby saltbush is a relatively new invasive species to our area.  It is an Australian native, and I can see it as the next Sonoran strangler.  It thrives… on nothing.  The experts at the Gardens suggest “pulling it out and carefully disposing of it,” but for the life of me I can’t seem to dig down far enough to get the sibling volunteer out of my front yard. 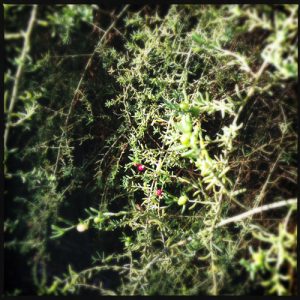 Next time you stroll the yard or walk your neighborhood, look out for these destructive devils.  They thoroughly enjoy our harsh climate, have a complex subterranean water-sourcing network, and bully the natives with their aggressive growth and reproductive behaviors.  Some of them burn hot, but not so hot that they endanger their own, just hot enough to suffocate the native seed.

* The exhibit at Tucson Botanical Gardens runs through April and is abundant with feared foliage, paired with vintage horror and information on the most destructive invasive species threatening our desert.